skip to main | skip to sidebar

I guess I am not much of a blogger....I will try harder!

Sorry for the delay in updates! I think most people who are checking have other ways of staying updated on Dominic anyway. Dominic is doing great, besides the frequent blood draws still for his INR levels (because of blood thinners). He has even potty trained since we got home...infact still in that 6 week recovery period. we had to lift him by his legs to put him on the toilet (lol). He has done great though and is even trained through the night despite the fact that he takes water to bed. He does still have the odd accident as a result of waiting to long but only during the day. He is yet to wet the bed (knock on wood).
We have all been sick off and on for the last week, but we seem to all be getting better. I honestly think Dominic had it the best out of all 4 of us. How does that work? Luckily he takes after his sister and has one heck of an immune system despite his half a heart.
So Tuesday we start homeschooling as well as our new diet. I have decided to go Gluten free and dairy free and bring Dominic along with me. I am going to be more cautious of what Jodi Lin is eating as well but I don't think I will be quite as strict with her. I don't believe she has an issue so much with dairy and gluten as with additives and preservatives. I think that in the long run this will be healthy for all of us. Pray for us though as this is a lot to take on all at once....along with the homeschooling.
I can't believe I am actually going to do it. Ever since Jodi Lin was old enough for JK, I always felt that I needed the break. Now as grade 1 draws near I know I don't want her gone all day everyday. I want to be the one who leads her and teaches her. Jodi Lin needs some more time with me. Dominic has taken so much of my attention in the last few years that I know she feels left out. Of course Dominic is still going to get my attention but now I will be spending so much quality time with my little princess as well. I am really looking forward to it and I believe she is too. Dominic will be doing some school as well....as much as he can take. He does seem to like being included and likes to work in workbooks.
Good news about Dominic is that I was able to set up some testing to look further into his lack of speech and figure out what maybe going on. I have been getting frusterated with having no explanation to why he is so behind in that way....(besides surgeries). I know that surgeries can delay them....but Dominic has not really spent that much time in the hospital. I am more concerned about the surgeries/bypass/ventilator causing actual damage that is make speech much more difficult for him. Basically we are looking into whether what Dominic is hearing is getting to his brain correctly. Now Dominic can understand and can hear but he seems to have a more difficult time processing what he hears and an even harder time relaying it back to you. He continues in speech twice a week and will soon be seeing OT as well. I haven't quite figured out what I am going to do with Jodi Lin during these time...but hopefully it will get figured out soon. Dominic's communication is coming along though and we are seeing even more of his character coming out. We are encouraged to teach him more signs though as he is very hard to comprehend....specially for someone that does not live with him.
The heart picnic was last weekend and we all had a blast. Thank you everyone who came and Joanna so much for your help. We had food provided by Maple Lodge Farms and payed for by Cardiac Kids. Thank you to both of them. Maple Lodge Farms even brought along a surprise....their nascar race car. The kids all loved it...it was very cool. I will have to post some pics later, I need to do some editing first.
I will keep you all updated on the testing and results! I am considering starting another blog (that I may actually use) all about how the diet and homeschooling are going. I will post a link if I go ahead with this.

Thanks for checking in!

Jenaia
Here is another pic of Dominic from Canada day....only 2 weeks post op. My little Spiderman! 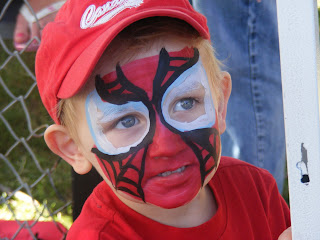